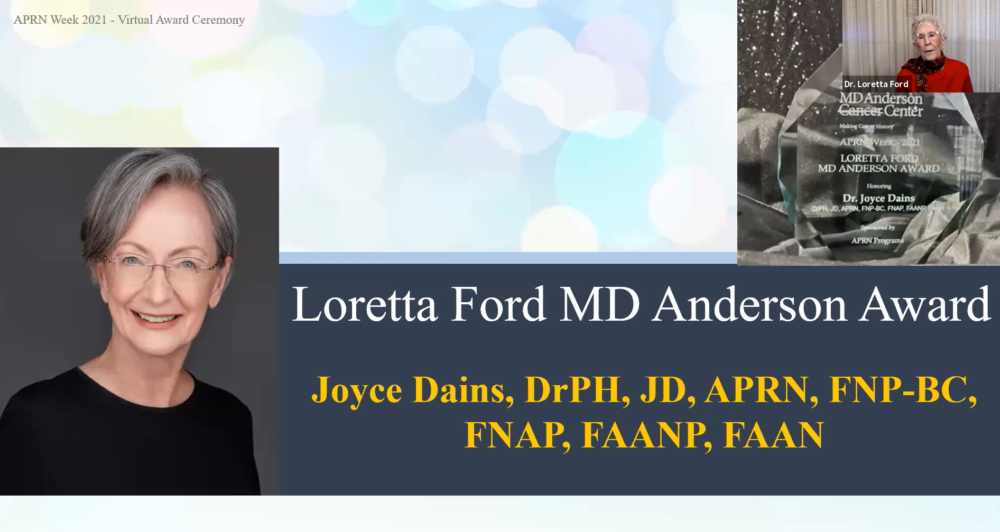 This year’s National Nurse Practitioner (NP) Week was a tremendous success — showcasing the many ways in which NPs lead in their communities all across the country. Members of the American Association of Nurse Practitioners® (AANP) submitted NP Week proclamations signed by elected officials in 48 states, setting a new record. The success and popularity of NP Week continues to grow and, through Advanced Practice Registered Nurse (APRN) Week, the celebration has expanded domestically and internationally to include all advanced practice nurses.

During this incredible week of celebration, an AANP Fellow and a distinguished NP in her field received special recognition from one of the world’s most respected centers for cancer patient care, research, education and prevention, The University of Texas MD Anderson Cancer Center. Dr. Joyce Dains was awarded the first-ever Loretta Ford MD Anderson Award. Named after the co-founder of the first NP program and a cherished AANP Fellow, Loretta Ford, EdD, RN, PNP, NP-C, CRNP, FAAN, FAANP, this award celebrates an NP who has made a unique contribution to APRN practice at MD Anderson.

Dains currently works as a professor and the chair of the Department of Nursing at the University of Texas MD Anderson Cancer Center. Additionally, she serves as the director of the Advance Practice Nursing Program and directs the Post-Graduate Fellowship in Oncology Nursing. This award is just the latest in a storied list of accomplishments Dains has earned since joining MD Anderson in 2002, where she has directed various educational programs in cancer prevention, screening and early detection for health care professionals across the U.S. and the world. Dains is a certified family NP who maintains a clinical practice in the MD Anderson Cancer Prevention Center.

Dains was awarded the Loretta Ford MD Anderson Award by none other than Ford herself, who hosted this year’s APRN Week virtual ceremony. AANP congratulates Dains for demonstrating extraordinary leadership, excellence in health care and the selfless dedication to her patients and the NP profession that earned her this award.

Get Recognized for Your NP Accomplishments

Do you know an NP leader who deserves to shine in the spotlight? Are you an accomplished NP in your field seeking recognition for your work? Every year, the AANP National Leadership Awards honor NP leaders who have made incredible achievements for NPs on a national or international scale.

Take some time to review the selection criteria for the Towers Pinnacle Award and the Sharp Cutting Edge Award so you can be ready once nominations for these awards open in February 2022. 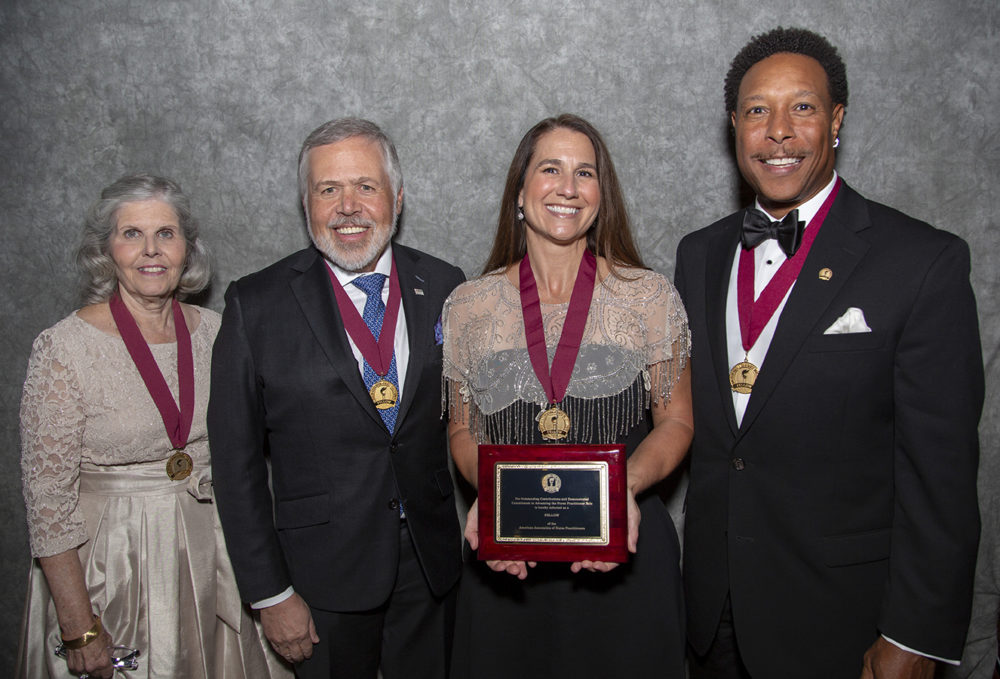 So You Want to be a Fellow?

Learn what it takes to join the ranks of the Fellows of the American Association of Nurse Practitioners.

AANP Is Committed to Diversity, Equity and Inclusion (DEI)