Will Biosimilars Help With Inflammatory Conditions? 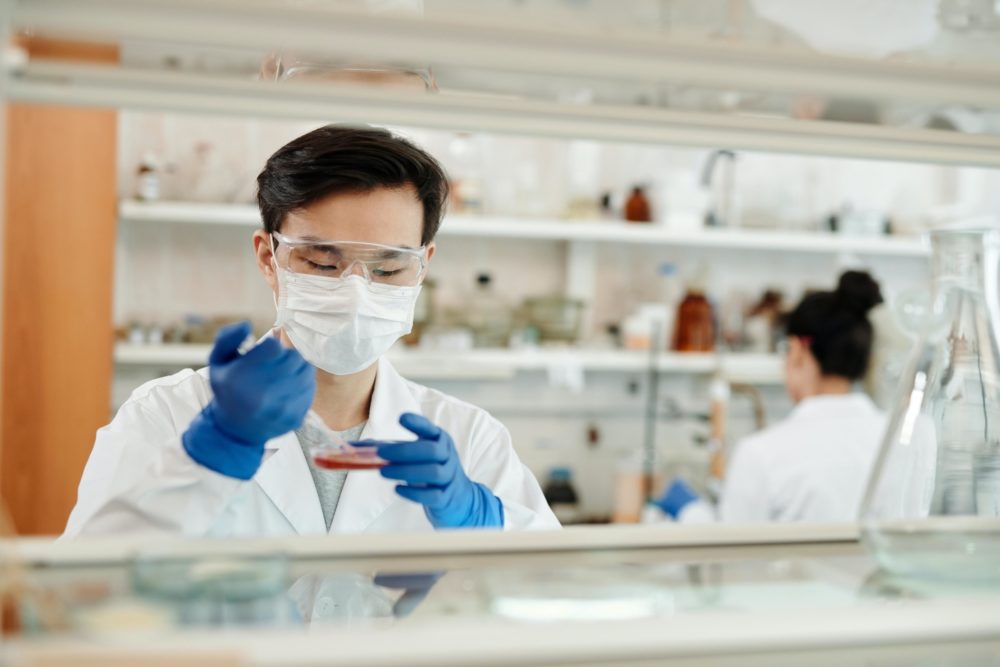 Learn more about biosimilars and complete the assessment to share your educational needs related to the use of biosimilars in patients with inflammatory conditions.

According to industry reports, the global market for pharmaceuticals reached around $955 billion in 2019, an increase of 23% over spending just five years earlier. In the same year, spending in the United States has been estimated to be anywhere from $485 billion to $500 billion, or approximately half of the amount spent on pharmaceutical drugs worldwide.

In addition to being the world’s largest market for pharmaceuticals, the U.S. is also the leader in drug development; per the Pharmaceutical Research and Manufacturers Association (PhRMA), U.S. firms conduct more than half of the world's research and development in pharmaceuticals and hold the intellectual property rights on most new medicines.

Drugs are classified in a variety of ways, including how they are created and manufactured. According to SelectUSA, a program of the International Trade Administration of the U.S. Department of Commerce, sectors include:

Pharmacology is an important tool for nurse practitioners (NPs) who treat patients with inflammatory conditions. Many inflammatory conditions such as rheumatoid arthritis, psoriatic arthritis, Crohn’s disease and ulcerative colitis are treated with biologics. There are four categories of biologics, tumor necrosis factor (TNF) inhibitors, Interleukin (IL) inhibitors, B-cell inhibitors and T-cell inhibitors. Of these, the most commonly prescribed are the TNF-inhibitors adalimumab (Humira), infliximab (Remicade) and etanercept (Enbrel). Many NPs working in rheumatology or gastroenterology most likely manage patients on TNF inhibitors.

Biologics have revolutionized care in several areas and, although they are relatively new agents in the overall practice of health care, some have reached their patent expiration and made way for the development of biosimilars. There are now 28 biosimilars approved in the U.S. by the Food and Drug Administration (FDA), with the most recent approved in July 2020.

A pathway for biosimilars was established under the Biologics Price Competition and Innovation Act (BPCI Act) of 2009, and in 2018, the FDA created its Biosimilars Action Plan (BAP) to advance policies to facilitate the efficient development and approval of biosimilars. The BAP contains four key areas: improving efficiency of biosimilar and interchangeable product development; maximizing scientific and regulatory clarity for biosimilar development; developing effective communications to improve understanding of biosimilars among patients, clinicians and payors; and supporting market competition by reducing gamesmanship or other attempts at unfairly delaying competition. More recently, in February 2020, the FDA issued a draft guidance document to address presentation of data and advertising about biosimilars.

Biologics — and now biosimilars — have enriched treatment options for patients with inflammatory diseases, such as rheumatoid arthritis (RA), psoriatic arthritis, ankylosing spondylitis, Crohn's disease, plaque psoriasis and ulcerative colitis. They have been particularly useful in patients who have been nonresponsive or intolerant to conventional therapies.

Switching patients from reference biologics to biosimilars may lead to significant cost savings. Due to the complex nature of developing and manufacturing a biologic, the costs to the patient are relatively high. The American College of Rheumatology’s (ACR) position on biosimilars is that patients should have safe and effective treatment at the lowest possible cost, and the decision to switch to a biosimilar from a reference product should be made between the patient and the prescriber. They also do not agree with “non-medical” switching — when a legal substitution by someone other than the prescriber, such as a pharmacist, is made, the patient and prescriber should be immediately notified.

In the United States, biosimilars have been approved for four different biologics for the treatment of many immune-mediated diseases, such as RA. As of July 1, 2021, the FDA has approved a total of 12 biosimilars for the reference tumor necrosis factor inhibitors, infliximab (Remicade), adalimumab (Humira) and etanercept (Enbrel), as well as two biosimilars for Rituxan (rituximab), a CD20-directed cytolytic antibody. However, only three are available to providers to prescribe: infliximab-axxq (Avsola), infliximab-dyyb (Inflectra) and infliximab-abda (Renflexis), which are all biosimilars to Remicade.

Although the U.S. experience with biosimilars is relatively brief, it is important to remember that the development of biosimilars is strictly regulated. Approval comes only after a rigorous, comprehensive evaluation process based on the “totality of evidence” provided by applicants. Such evidence must include a demonstration of highly similar physicochemical, biological and clinical performances, which may involve animal studies as well as human pharmacokinetic and pharmacodynamic studies; a clinical immunogenicity assessment; and head-to-head clinical studies, if necessary. However, once approved, the complex molecular structure of these drugs requires continued surveillance to detect allergic reactions or events due to immunogenicity that may not have been demonstrable when the drug was in development. In some cases, a patient may not develop antibodies in response to the biologic and there is no response to the medication. Others may develop a severe allergic reaction.

In general, however, clinician and patient knowledge about biosimilars is limited. In a study of 629 patients in France with inflammatory rheumatic diseases, only 43% knew what biosimilars were; among those being treated with a biosimilar, 44% were not informed before they received a biosimilar. Concerns focused primarily on efficacy (60%) and safety (57%) in comparison to the biologic, and 15% would refuse to switch to a biosimilar. The investigators found that patient education about biosimilars was associated with better adherence.

In another study, the authors found in the literature review that many health care providers approached biosimilars with caution and there were gaps in understanding the fundamental concepts of biologics and biosimilars across all studies reviewed. In a survey of 320 rheumatologists, the majority (83%) were either very or extremely familiar with the FDA definition of a biosimilar product. Most (96%) were aware there was an FDA-approved biosimilar for infliximab, and significantly fewer realized that biosimilars were available for adalimumab, etanercept and rituximab.

Other studies found health care providers were knowledgeable about biosimilars, yet there remains a gap in comprehending the development, regulatory approval and interchangeability of biosimilars. Health care professionals are more apt to initiate treatment with a biosimilar than switch from a reference biologic to a biosimilar. Part of the reluctance to switch is a lack of understanding the value to the patient. Many patients aren’t willing to make the switch to a biologic if they don’t understand the rationale or benefit, despite the cost savings.

Providers must understand when biosimilars should be used and the FDA review process in order to explain it to the patients and ensure they are safe and effective. Navigating the potential payment issues is another area of concern with biosimilars. Not all private payers have guidelines for using biosimilars, which can delay the claim processing. Providers should also be aware of the “nocebo” effect, which is when a patient’s negative perception of therapy leads to a worse outcome than is expected and is unrelated to the physiological action of the treatment. Education and effective communication with patients may reduce any pre-existing, negative perceptions and concerns about biosimilars, leading to avoidance of the nocebo effect and better adherence to biosimilars.

Just as generic drugs provided an approval pathway to help reduce costs associated with chemically derived originator drugs, the BPCI Act did the same for biosimilars and biologics. In doing so, the federal government acknowledged the tremendous efficacy and potential in biopharmaceuticals while attempting to reduce the often overwhelming costs associated with biologics. As with much of medicine in the U.S. today, cost contributes significantly to the decision-making process surrounding treatment and disease management. NPs are at the forefront of working with patients and facilitating those decisions; as such, they need to understand the cost considerations associated with the use of biosimilars, including supporting patients when they deal with insurance companies, Medicare and Medicaid. NPs must help patients understand the cost implications between biologics and biosimilar drugs.

The Next Step: Education on Biosimilar Use in Inflammatory Conditions

The American Association of Nurse Practitioners® (AANP) is interested in developing a continuing education (CE) program for NPs to expand their current knowledge of biosimilar concepts, including overcoming barriers associated with switching to biosimilars and having evidence-based, shared decision-making discussions with patients about biosimilars.

You can play an integral role in the development of high-quality NP CE programs by sharing your experience and interest in biosimilars. Simply take the survey below to indicate your interest!

University of South Carolina College of Nursing, Faculty and Students Honored by American Association of Nurse Practitioners for Life-Saving Efforts During COVID-19

AANP Communities Are Waiting for You

Collaborate, share documents and meet NPs by joining an AANP Community, online forums available for a number of therapeutic areas and professional interests.

With videos, podcasts, articles and more — plus sponsored content from industry leaders — the JAANP Resource Center is a brand new way for NPs to stay updated and informed!

Support the creation of clinical, practice and educational tools that help NPs nationwide provide cutting-edge care for their patients.

Take Me to the CE Center